The Palestine Branch, or Branch 235, is one of the branches of the Military Intelligence Division in Damascus. The Palestine Branch was named on its completion in the 1970s after its supposed objective, which was to support the Palestinian people in their efforts to attain the same freedom and rights that the Syrian regime denied its own people. The Palestine branch also worked against Israeli intelligence operations. Despite these supposed objectives, it has never been used for these aims. The branch is currently headed by Brigadier General Mohammad Khalluf, well-known as one of the officers who was present during the regime's previous operations in Tripoli and one of those accused of involvement in the assassination of former Lebanese leader Rafik Hariri. Palestine Branch is also one of the most important and oldest branches of the intelligence apparatus. It targeted the Islamic movements in particular. Under this branch is a unit called the "Sacrifice Police Unit," which has its own separate building. The Palestine Branch is located beside the southern motorway leading from Damascus in the south eastern Al Qazaz area, and is bounded to the north by the College of Mechanical and Electrical Engineering. To the south of the branch is Al Qazaz neighborhood and to the east the airport and the Jaramana camp, while the western side of the branch houses an industrial estate. The Branch has seven floors above ground, as well as a number of subterranean levels, with each floor dedicated to the investigation of different issues.

On the first floor are prisoners held by the "Department of Political Investigations," while the fourth floor houses the inmates of the "Department of Islamist Investigations," formerly headed by a senior regime member known as "Mounir," who has reportedly been detained by the Free Syrian Army. Another floor houses prisoners incarcerated for fraud (excluding those involved in the regime's fraudulent interests), while a fourth holds members of Palestinian organizations (though not Israeli ones). A fifth floor holds prisoners accused of arms smuggling. In the subterranean levels are the torture cells and solitary cells. Each floor of the building is divided into cells and dormitories, with a former detainee explaining that each of the 38 cells on every floor measures 1.5 square meters, while the 19 dormitory cells on each floor, each holding over 60 detainees, measure 5 by 5 square meters. Every floor also has six toilets and three bathrooms, which prisoners are permitted to use at certain limited hours of the day, with some prisoners assigned to cleaning these facilities and the solitary cells in the prison's underground section.

The Palestine Branch has at least three underground floors where detainees are interrogated and tortured. The cells resemble burial chambers. They do not contain ventilation holes or access to sunlight. There have an area of 4 by 3 meters and contain at least 30 inmates each. Inmates share military blankets that are infested with insects such as lice and cockroaches as well as some "insulators", which are pieces of cloth used in military uniforms. Inmates are allowed to use the toilet only three times per day, for no more than half an hour each time. Due to poor nutrition and deplorable conditions, especially the lack of ventilation, diseases frequently spread within the branch, especially cases of poisoning. There are also some female inmates who suffer from chronic diseases such as diabetes, hypertension, and heart disease, particularly older women. However, the branch provides only pain killers as medication, which the inmates usually must beg the guards for.

Regime forces inflict every method of inhuman torture in the Black Branch, most of which are illegal under international law, with detainees also including non-Syrians. The branch has become one of the most infamous in Syria for the barbarism of the torture perpetrated there, standing out even among the notoriously brutal regime prisons for its severity, with one former detainee writing, "It's hell. I am confident that Satan can't punish people as terribly in Hell as the torturers do in this branch!" Among the gruesome forms of torture listed by detainees as being routinely deployed by regime personnel at the Black Branch are rape of male and female detainees, the insertion of broken bottles into inmates' body orifices, keeping prisoners awake for more than three days at a time, and applying electrodes to sensitive areas of inmates' bodies, including the private areas. The number of people killed daily under torture ranges from 10 to 15 people. 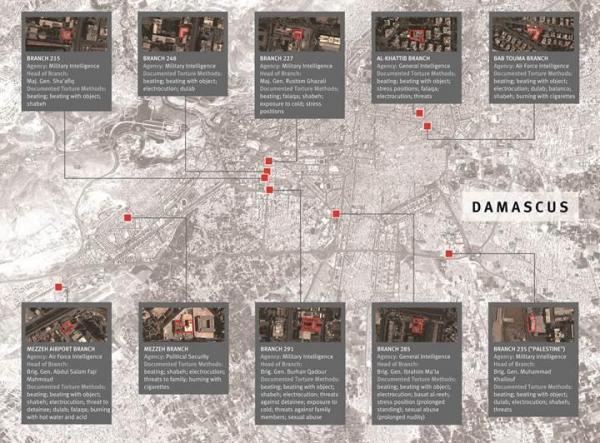