Al-Dahi crossing is a checkpoint which was set up by Ansar Allah (Houthis), west of Taiz city, through which it imposed a suffocating siege on the population and Taiz city. Ansar Allah (Houthis) prevented civilians from passing the cross to get their basic needs such as food, gas and other needs, kidnapped dozens and disappeared others at the crossing area in addition to committed different crimes.

This is a checkpoint next to a temporary prison, where the most horrible direct and temporary violations were committed. It served as the entry and exit point into an entire besieged city for over a year. The Houthi militia lifted the siege over this point only to expand the siege area to include other points west and east of the province, and they still hold all humanitarian aid allocated to Taiz in the eastern region.

There is still a horrible memory associated with this place, where all kinds of violations were committed against the city’s population and all the people who passed through this checkpoint, including degrading treatment, killing, arrest and assault. This infamous checkpoint was covered by several news reports and there was a lot of work documenting the events and violations that affected women, men and children where even oxygen was not allowed to pass through into hospitals, let alone the food, vegetables and even gas cylinder.

In the future, we will work to establish sites of memory through multiple programmes in the same site. 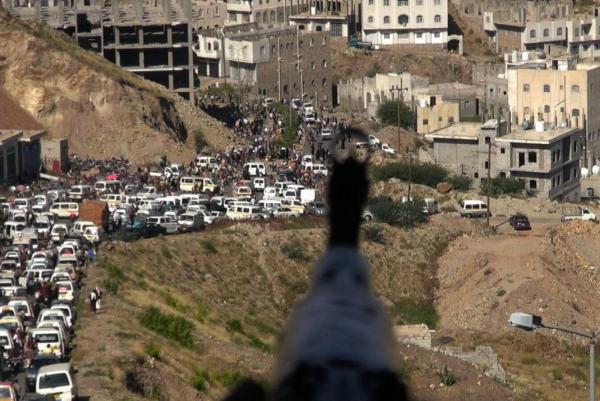 Al-Dahi crossing in Taiz through blood and feet, Almushahid.net, 21 February, 2016